Ronald Brautigam has deservedly earned a reputation as one of Holland’s most respected musicians, remarkable not only for his virtuosity and musicality but also for the eclectic nature of his musical interests. He has received numerous awards including the Dutch Music Prize and a 2010 MIDEM Classical Award for best concerto recording for his CD of Beethoven Piano Concertos with the Norrköping Symphony Orchestra conducted by Andrew Parrott.

We are thrilled to welcome Ronald back to Manchester. 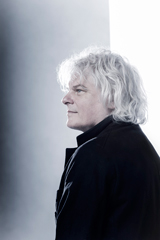