We are thrilled to welcome back Alicja Fiderkiewicz to give a solo recital in Stoller Hall.

“Her playing is distinguished by her innate sense of style and immaculate articulation. These qualities combine with true musicianship to give performances of uncommon interest, Her interpretation of Beethoven’s “Pathetique” Sonata was masterly; the strength which underlies her playing is always finely controlled and her phrasing delineates the development of the music. The slow movement especially, was most beautifully played with a sober elegance and a wealth of controlled feeling.” Daily Telegraph

Alicja has performed widely throughout the UK including number of recitals in the Wigmore Hall, St. John’s Smith Square, St-Martin’s-in-the-fields in London. She has performed in Manchester, Isle of Man, Liverpool, Birmingham, Edinburgh, Glasgow to name a few. As well as performances in the UK Alicja has performed concertos and recitals in Poland, Russia, Ukraine, Israel, Italy, Switzerland, Cyprus, Spain, Finland, Japan, USA, Singapore & Malaysia. 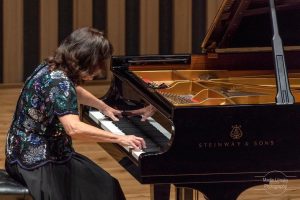