‘Murray McLachlan is a pianist with a virtuoso technique and a sure sense of line. His timing and phrasing are impeccable, and his tone-full but unforced in the powerful passages, gentle and restrained in the more lyrical- is a perpetual delight’ (BBC MUSIC MAGAZINE)

McLachlan’s repertoire includes over 40 concertos and 25 recital programmes. He has performed the complete Beethoven piano sonata cycle four times, as well as the complete piano music of Brahms. He has given first performances of works by many composers, including Martin Butler, Ronald Stevenson, Charles Camilleri, Michael Parkin and even Beethoven! He has appeared as soloist with most of the leading UK orchestras. His recognition has been far-reaching, bringing invitations to perform on all five continents.

As well as performing and teaching, he is well known internationally for his numerous articles on Piano technique and repertoire. This includes extended columns which have appeared in ‘International Piano’ ‘Pianist’ and ‘Piano’ Magazines. In 2012 he was awarded an honorary doctorate by the University of Dundee for outstanding services to music and education. This follows on from a knighthood awarded in 1997 by the Order of St John of Jerusalem in recognition of his services to music in Malta. 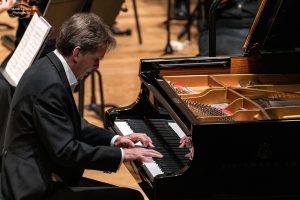