We are thrilled to welcome  the legendary pianist Peter Frankl back to Stoller Hall for another memorable performance. He will be joined by Martino Tirimo for two Schubert duets.

After studying at the Franz Liszt Academy of Music in Budapest, Frankl won several piano competitions in the late 1950s. He made his London concert debut in 1962 and first performed in New York in 1967 when he appeared with the Cleveland Orchestra under George Szell. He also studied with Maria Curcio, the last and favourite pupil of Artur Schnabel. He has appeared as soloist with many other orchestras and conductors, including Abbado, Ashkenazy, Barbirolli, Blomstedt, Boulez, Chailly, Davis, Doráti, Fischer, Haitink, Kempe, Kertész, Leinsdorf, Maazel, Masur, Muti, Sanderling, Solti, Szell, among others.

Schubert Rondo in A major

Allegro in A minor “Lebensturme” 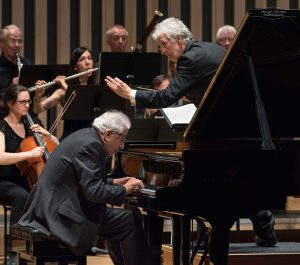