This morning Paul will work with talented young pianists in a masterclass from Stoller Hall. This event will also be Livestreamed.

Paul’s  multi-award winning discography for Harmonia Mundi includes the complete Beethoven piano sonatas, concertos, and the Diabelli Variations, Liszt’s B minor sonata and other late works, all of Schubert’s major piano works from the last six years of his life including the 3 song cycles with tenor Mark Padmore, solo works by Schumann and Mussorgsky, and the Brahms D minor piano concerto with the Swedish Radio Symphony Orchestra and Daniel Harding. Future recording plans include a multi-CD series of Haydn sonatas, Beethoven’s bagatelles, and works by Bach.

After Chetham’s Paul studied with Joan Havill at the Guildhall School of Music and Drama in London before going on to study privately with Alfred Brendel. He is co-Artistic Director of Midsummer Music, an annual chamber music festival held in Buckinghamshire, UK. 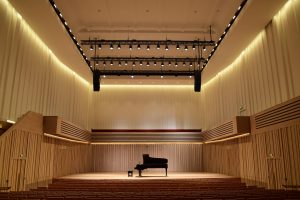