Brahms: Variations on a theme by Robert Schumann, Op.9

Benjamin Frith was encouraged by his teacher, Fanny Waterman, to pursue a musical career after winning the UK Dudley National Piano Competition at 14. He has since recorded 17 solo discs and performed with many of the great orchestras and conductors. At 20 he became a Mozart Memorial Prize winner and was invited by Sir Peter Pears to appear at the Aldeburgh Festival. He achieved international recognition by sharing top prize in the 1986 Busoni International Piano Competition, and 1st prize in the 1989 Arthur Rubinstein International Piano Masters Competition, making his debut at the Edinburgh Festival in 1992 with Beethoven’s Diabelli Variations. A life long interest in chamber music was realised in his becoming a member of the Gould Piano Trio in 1998. 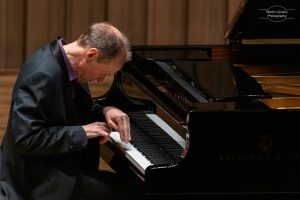