After graduating with a “Diploma of Distinction” from both the Central Music School and the Moscow State Tchaikovsky Conservatory, Dina Parakhina went on the become one of the youngest-ever members of the Central Music School faculty when she inherited the chair formerly held by her teacher, professor Tamara Bobovich. She occupied this post for fifteen years until she moved to the UK in 1996, and was one of the most-wanted pedagogues in her native Russia. She combined teaching with a busy performing career, collaborating with many outstanding instrumentalists, singers and conductors, as well as playing with major Russian orchestras, giving recitals and making TV and radio broadcasts at the most prestigious venues in Moscow and other cities of the former Soviet Union.

Dina is in great demand both as a performer and teacher. We are thrilled to welcome her back to the Stoller Hall for a solo recital. 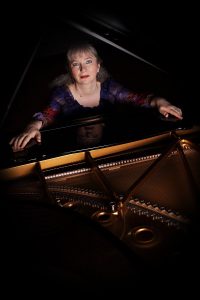